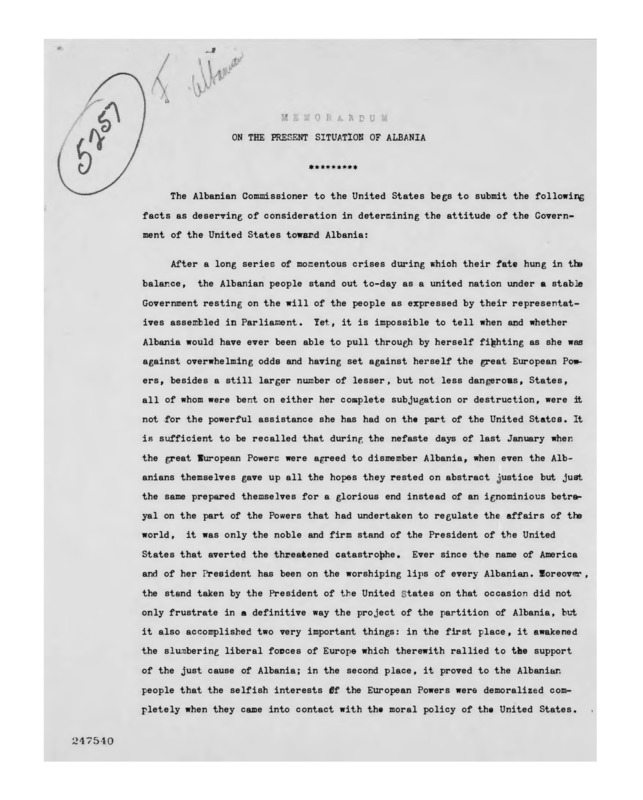 Memorandum of the Present Situation in Albania

MEMORANDUM ON THE PRESENT SITUATION OF ALBANIA

After a long series of momentous crises during which their fate hung in the balance, the Albanian people stand out to-day as a united nation under a stable Government resting on the will of the people as expressed by their representat­ives assembled in Parliament. Yet, it is impossible to tell when and whether Albania would have ever been able to pull through by herself fighting as she was against overwhelming odds and having set against herself the great European Pow­ers, besides a still larger number of lesser, but not less dangerous, States, all of whom were bent on either her complete subjugation or destruction, were it not for the powerful assistance she has had on the part of the United States. It is sufficient to be recalled that during the nefaste days of last January when the great European Powers were agreed to dismember Albania, when even the Alb­anians themselves gave up all the hopes they rested on abstract justice but just the same prepared themselves for a glorious end instead of an ignominious betra­yal on the part of the Powers that had undertaken to regulate the affairs of the world, it was only the noble and firm stand of the President of the United States that averted the threatened catastrophe. Ever since the name of America and of her President has been on the worshiping lips of every Albanian. moreover, the stand taken by the President of the United States on that occasion did not only frustrate in a definitive way the project of the partition of Albania, but it also accomplished two very important things: in the first place, it awakened the slumbering liberal forces of Europe which therewith rallied to the support of the just cause of Albania; in the second place, it proved to the Albanian people that the selfish interests If the European Powers were demoralized com­pletely when they came into contact with the moral policy of the United States. Henceforth, with a radiant faith in the support of America and of the awakened liberal forces of Europe, the Albanian people resolved unanimously to put up force against force, the powerful force of the weak as against the brutal strength of the wicked. so much so that when the time came to oppose the intolerable pretenses of Italy, the whole nation rallied around its Government and brought to a triumphant conclusion the unequal war against the great Power that was forced, at the end, to give up the Albanian possessions the Peace Conference had awarded to it. What is more, Italy, the very Power that stood in the way of the realiz­ation of the unity and independence of Albania, did not only recognize these two attributes of sovereignty, but she also became the guarantor of the same as ag­ainst other nations. This is what the spirit of America accomplished in Albania whose people are ever so grateful to this great country and to the man that staids at its head.

Yet , the Albanian Commissioner deems it bis duty to state frankly that tre Albanian people believe that they have experienced a slight disappointment in America's attitude toward their country. They always felt and hoped that the United States, having done so much for Albania, would be the first to extent re­cognition to its triumphant statehood, and,that, after Italy was forced to do so not in the form of a gracious act of sovereignty but as a condition of peace with Albania, the United States would have been the first again to exercise that bere­volent act of sovereignty and goodwill toward the new State.

The Albanian people feel all the more disappointed because they aee con­vinced that they have fulfilled all the requirements for recognition. They have a stable Government, which has been in power for nine months, resting completely on the will of the people as expressed at all times by their representatives assembled in Parliament. Their form of Government is not only representative but also republican. Their Government is exercising the attributes of sovereignty over the territory recognized as appertaining to the Albanian State by the London Conference of 1912-1913, with the exception of some strips that the Serbians have occupied with the doubtful assent of the Allies and whose occupation has, most unfortunately, caused friction between the two Governments.

The desire for recognition on the part of the United States is all the more emphatic because of the fact that Albania wishes to establish commercial relat­ions with the United States and take advantage of the material wealth of the lat­ter in order to develop her natural resources and put the country on a level wihh the other civilized nations. There is already an acute demand for capital for the construction pf public works, railroads, docks, wharfs, shipping etc. etc. The Albanian Commissioner has had several inquiries on that point on the part of American financial institutions that are desirous of undertaking such develop­ments; but they always stumble on the question of recognition.

It is to be observed, likewise, that despite the actual strength of the Alb­anian Government which enjoys the confidence of the people, non-recognition means putting a premium on anarchy, and the Albanian people firmly believe that the United States is not willing to see their country in such a state.

It is, therefore, the firm hope of the Albanian nation that the United States Government will not delay any longer the taking of- the steps that lead to recognition, crowning thus the highly beneficent work that it has already done in the direction of redeeming Albania's destiny.