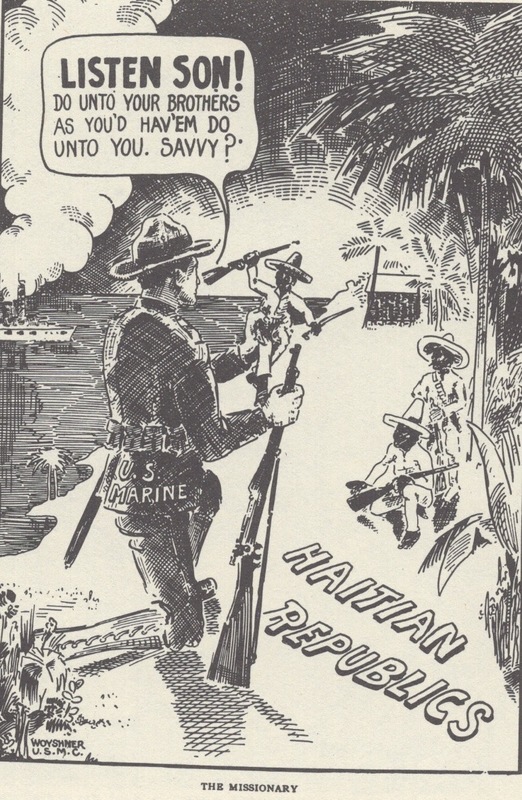 One of the first major projects of U.S. forces was to repair the roads built by the French that were in poor condition and unsuitable for modern vehicles. In order to have enough manpower to complete the project, the U.S. revived a Haitian law from 1864 that required peasants to labor on roads instead of paying the road tax. This system of conscription was known as the corvée. The revival of this law was masterminded by Smedley Butler, and the corvée led to widespread abuse and mistreament of Haitians. The corvée was abolished in 1918 due to rising hostilities, but the system was continued illegally in some parts of the country, most notably under Major Clarke H. Wells. The areas under his rule in the northern and central regions of the country later became the location of the 1918-19 caco uprising.

Caco uprisings and guerilla warfare reached its peak in 1919. Out of the 2,250 Haitians killed in the first five years of the occupation, 1,861 were killed in 1919. Charlemagne Péralte, a powerful caco leader, formed a rebel government in the north and claimed to have 30,000 to 40,000 cacos in his army, while the Americans estimated he had a force of only 2,000 cacos. Péralte was later killed by two Marines and photographs of his body were distributed as a warning to other cacos.

During the uprisings, illegal executions of cacos was widespread. Many cacos were shot instead of facing trial and properties were sacked and burned. This period of time was commonly known as "open season." After hearing of these atrocities, Secretary Daniels ordered a full investigation in August 1920, but it was unsuccessful. Some gendarmerie records containing information of the crimes disappeared. Daniels' orders were subverted by the assistant adjustant general of the Marine Corps with approval from Major General Commandant George Barnett. Other reports were lost in the mail, and the investigation failed to call important witnesses. Despite efforts to hide what was happening in Haiti, the brutality of the occupation became a national issue after a letter was made public that contained orders to stop killing Haitians. Warren Harding, who was running for president at the time, quickly picked up on the issue of Haiti, and the 1920 presidential campaign led to many exposés written about the occupation.

Excerpt of 1922 Senate Hearings on Haiti and Santo Domingo

Confidential order issued to the Marines in Haiti by the Brigade Commander in October 1919, as reported in the 1920 Senate Hearings on Haiti and Santo Domingo