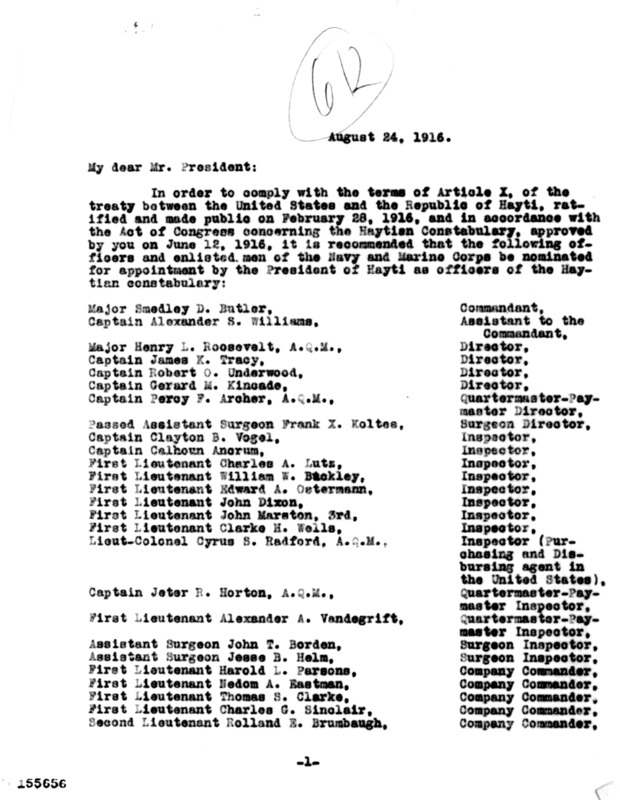 Approved list of officers to serve in Haitian Constabulary

Upon landing in Haiti, the U.S. was able to almost completely eliminate caco activity in six months. The U.S. placed Marine outposts in the interior of Haiti where caco activity was centered, and the rebel forces were relatively inactive until the conscription program of 1918 and the uprisings of 1918-19. Along with the outposts, some cacos were bribed to turn in their weaons, and others were pursued and killed by Marines. Secretary of the Navy Daniels, who was an outspoken anti-imperialist, learned of the killings and ordered Admiral Caperton to contact Washington before ordering offensive actions against the Haitians.

After neutralizing rebel forces, the U.S. established a constabulary similar to those in the Dominican Republic, Cuba, and Nicaragua. Smedley Butler was appointed as the first commandant of the gendarmerie in December 1915. Gendarmerie officers were all-powerful in the districts they governed. One officer became known as papa blanc to his district, and he called the people mon fils (my son) and ma fille (my daughter). Another gendarmerie officer was crowned king of the island of La Gonave. Despite their power and influence, the gendarmerie had many weaknesses. Officer recruitment was difficult due to the illiteracy and ineducation of the majority of the population. The educated elite declined service in the gendarmerie because police officers were considered to have a low-status job. Experienced, well-educated American officers were sent to Europe during World War I rather than the Caribbean. These weaknesses were not pressing issues until the uprisings of 1918-19.

Although there was violence and manipulation from the beginning of the intervention, Admiral Caperton and his assistant Captain Beach were personally liked by the Haitian elite. Caperton maintained a policy of respect and sympathy with the Haitians, and he instructed his Marines to be friendly. Caperton and Beach left Haiti in 1916 and were replaced by Colonel Littleton W.T. Waller. Instead of a policy of respect, Waller imposed a policy of force and racial prejudice. Waller was assisted by Smedley Butler, and relations between the U.S. and Haiti quickly deteriorated under their administration.

"Last night the nephew of one of the prominent politicians attacked one of our Gendarme sentries, firing three shots at him. The Gendarme pursued him, and finally blew a hole in him as big as your fist, thus ending the life of a miserable cockroach. This morning there is a big uproar among the prominent citizens over the 'unjustifiable' shooting of this leader of society. However, if all the leaders will only get busy and attack sentries we will soon clean up this country."  — Excerpt from a letter by Smedley Butler to his father