Responses to the Occupation

The 1922 Senate Inquiry revealed many problems and organizational issues that aided in creating an environment of chaos and prejudice. Marines were largely left to their own devices, and many had no knowledge of the policy concerning Haiti. There were basic problems with administrative confusion. Military officials and civilian officials were often in conflict, mainly over who was in charge.

Although the Marines were often unsupervised by Washington, the Wilson Administration put great emphasis on passing the new constitution of 1918 and establishing a 20-year extension of the Haitian-American treaty of 1915. This extension, signed March 1917, created valuable conditions for American investors, including Franklin D. Roosevelt, who was looking to buy a plantation during his visit in January 1917. Wilson considered withdrawing troops in 1919, but the Marines were in the middle of guerilla warfare against rebel forces, and it was already too late.

The Senate Inquiry was conducted by the Select Committee on Haiti and Santo Domingo, which was made up of three senators and chaired by Senator Medill McCormick of Illinois. The committee recommended the reorganization of the occupation so that the confusion and inefficiency would be eliminated. The committee was critical of the Wilson Administration for their lack of organization and centralized authority, enforcing the corvée, and employing personnel who were prejudiced towards the Haitians. To alleviate the issues in Haiti, the committee ordered the appointment of a High Commissioner to supervise the gendarmerie, Marine brigade, and civilian treaty officials, as well as the creation of programs for industrial and agricultural education, the abolition of martial law, and the coordination of the occupational administration. It was not recommended that the U.S. pull out of Haiti due to fear tht the government would fall into the hands of rebels.

Newspaper clipping on the Senate Hearings of 1922

Haitian novelists and poets also began focusing on ethnography and folk culture during the occuption, leading to a development of la littérature engagée. This literary style is one of the earliest manifestations of the Négritude movement of the 1920s. Haitian literature highlighted American racism and brutality, as seen in popular books like Le  Négre Masqué by Stephen Alexis and La Blanche Négresse by Virgile Valcin.

The Haitian newspapers and journalists also played a large role in opposing the occupation, even though this was especially dangerous due to American surveillance of the media. Editors and writers who published anti-American literature were often jailed without trial, especially under the Russell-Borno government. There was also an effort to increase international knowledge of the occupation and bring the issue in front of an international body, like the League of Nations.

The freedom of the press will not be interfered with, but license will not be tolerated. The publishing of false or incendiary propaganda against the Government of the United States or the Government of Haiti, or the publishing of any false, indecent, or obscene propaganda, letters signed or unsigned, or matter which tends to disturb the public peace will be dealt with by the military courts.
— Admiral Caperton 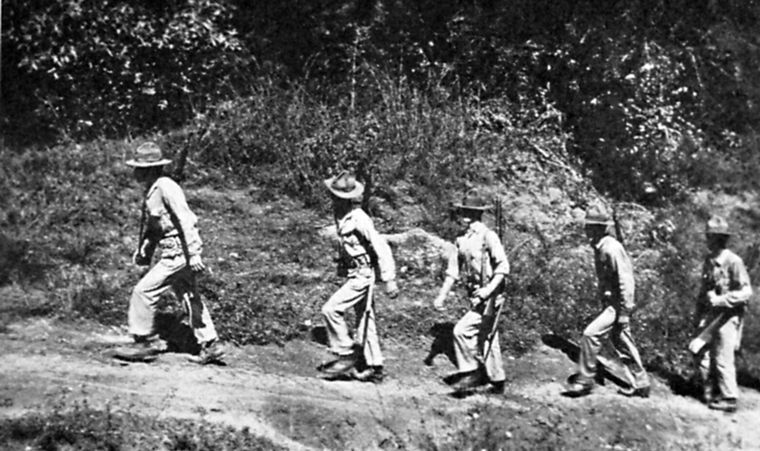 There were several conditions that led to the 1929 riots and revolts, and they came to a head at the end of 1929. The Russell-Borno "joint dictatorship" was very unnpopular with Haitians, both the elite and peasants, and Russell and Borno did little to improve attitudes surrounding the occupation. There were also very few efforts to reduce illiteracy rates or educate Haitians on the democratic process despite occupation officials claiming Haitians were too ignorant and unfit to participate in elections. Tensions increased after an amendment was passed in 1928 that extended the president's term from four years to six years, meaning Borno would continue as president. Borno announced the cancellation of the 1930 presidential election in 1929, and national outrage ensued.

Economic conditions also contributed to the uprisings. A bad coffee crop in 1928 led to an economic downturn that was only worsened by the economic depression of 1929. In order to continue paying off creditors and maintain salaries, occupation financial officials chose to increase taxes.

In October 1929, students began striking throughout Haiti and it quickly grew into the threat of national strike by November. The nation-wide strikes began December 4, 1929, causing Russell to declare martial law. The constabulary and rioters clashed throughout Haiti, but the worst of the fighting occurred on December 6, 1929 at Aux Cayes. Marines fired point-blank on a mob of 1500 peasants armed with stones, machetes, and clubs after a mob leader allegedly attacked a Marine. Casualty lists published by the Haitian press listed 24 dead and 51 wounded after the riot. Russell, facing criticism from Washington, reminded them that the death toll could have been much higher and that the Marines were firing over the heads of rioters to scare them off. Russell blamed the strikes on the people's ability to be agitated instead of recognizing problems with the occuption itself. He later used this argument to refuse Haitian communal elections because he believed the people could be too easily swayed.

The Aux Cayes Massacre led to increased opposition to the occupation in America and even internationally. The U.S. was condsidered hypocritical for touting freedom and democracy while occupying Haiti and killing the native people. The U.S. was compared to Great Britiain in India and Japan in Korea. The combined pressure from the press and the surprise of the 1929 uprisings led to a shift in American policy. The main objectives were now to avoid any further demonstrations and withdraw American forces as quickly as possible.